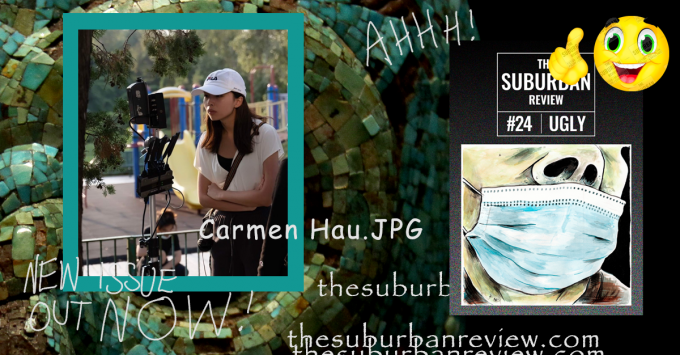 CARMEN HAU graduated from the University of Melbourne with a major in Film Studies and minor in Psychology. Studying bored her out but she has a flair for creating stories with peculiar settings. Carmen is now based in Hong Kong, finishing her first feature screenplay. Her directorial shorts include Breeding, The Gaze, The Enlightenment of Old Chap, and Abandoned.

Our Associate Editor Megan Payne talks to Carmen about her photograph, ‘Sperm in the Head’, published in #24: UGLY

I love your title! The inevitable questions it inspires direct me straight to the photograph, not for answers, but for more material to couple with my curiosity and dream into the visual story. I could go on, but I’d love to know how you came upon this title or what it means to you.

This photo was taken with my ex-boyfriend when we were still in love. He is the subject of this image. ‘Sperms in the head’ is a Chinese slang meaning that a guy is so caught up in desire that he loses all sensibility. It could also mean someone is so in love that they will do anything for their lover or anything that is asked of them. I guess that’s what I saw or hoped to see from him when we were together.

Below the draped fabric, the subject’s head looks squishy, as though their skull was somehow infiltrated. I’m curious about the actual construction of this image. Has the title seduced me into seeing something that isn’t there? What materials did you use?

I simply used his scarf to cover his head when I took the photo and edited his head to look squishy. No other tricks but Photoshop haha.

How do you tend to approach creating; what kind of processes do you play with/follow/take?

I’m always a big fan of David Lynch. His masterpiece Eraserhead is the most important film I watched when I was studying films in Melbourne. During the time I created this image, I was so obsessed with the genre of body horror. I loved to explore the possibilities of how the body can be distorted and represented in different art forms to fit for certain contexts. I also admire the work of the French subversive photographer Antoine D’Agata. His works are dark, depressive, disruptive, and reflect human nature at its most insalubrious. I was also inspired by Ren Hang, an avant-garde photographer from Beijing. His work is significant for its representation of Chinese sexuality within a heavily censored society. Ren’s erotic, playful, and provocative works have had a great impact on my works and I feel deeply sorry for his suicide in 2017.

Also, I wanted to share with you the figure from Eraserhead, which you can see here, that had been the biggest inspiration to the creation of my work ‘Sperm in the head’.

About Megan Payne 4 Articles
Megan is a dancer, choreographer, and writer, based in Narrm. In 2020, in response to lockdowns, they co- created and hosted the radio show Land Swimming as a way to feel closer to swimming and bodies of water. Megan loves writing poetry and is currently working on a fiction manuscript about a non-binary character's relationship with their ageing Grandmother, who also happens to be a werewolf. They study Professional Writing and Editing at RMIT.