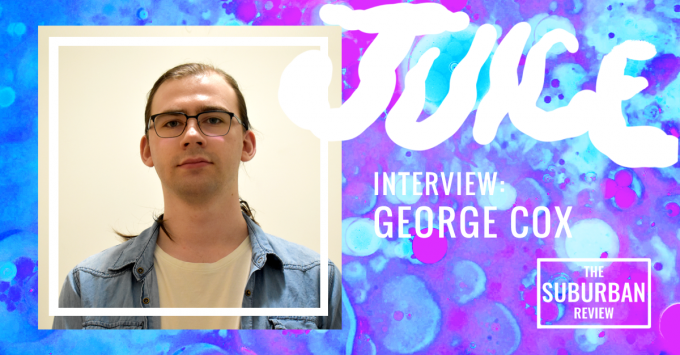 GEORGE COX recently completed his Honours thesis at the University of Melbourne on the literary theory and intellectual history of I. A. Richards. Now he is writing poems and shelving books. He has lived and studied on the land of the Wurundjeri and Boonwurrung people of the Kulin nation since 2013. Find him on Twitter @george_r_t_c.

‘Morning Routine’ is a really interesting example of concrete poetry and, for me, the shape is reminiscent of an orange rind turning, or a cloth being wrung. There is a lot of motion and dynamism in the poem’s shape—can you expand on how you arrived at this form?

I’m really pleased that the concrete aspect of this poem has worked so well. I think my priority in devising the form of this poem was creating the opportunity to use the ‘I’ as a point of inflection and transition. That was my goal on the level of experimenting with concrete poetry—to visually render the build-up and concentration of syntactic forces and phonic patterning, funnelling, and filtering them through the ‘I’.

This particular pronoun lends itself to reflection on the status of the self or the identity that it presumes to name—the way it is produced, the functions that it serves in navigating the movement between places and affects. And there are many poets who have innovated with the role of the pronoun and the speaker, but in this case I was just happy that it is a very thin letter.

The examples of the rind and the cloth cast the poem in three dimensions, producing the ‘I’ as a moment of maximum torsion—I’m imagining orange juice coming out of the cloth at that point, having confused the images in my head. But the poem also plays with its two-dimensional orientation to the margin: in the first half, the indentations pinch together, shrink, become lighter, as if each sentence were a net cast more shallowly than the last into thought. The ‘I’ breaks the surface of the water, daybreak, and then speaks from a place apparently more grounded; namely, having one’s margin on the left, having left dreams behind. I’m thinking about what it means for words to try to meet their margins.

There’s a brutality to this poem (‘bites itself to death’, ‘topology of /traumatised/dreaming’) that contrasts with the poem’s surprising ending. It makes me think about how trying to maintain your daily routine when everything’s falling apart can feel like a certain kind of violence. What informed this poem? What references did you draw on?

I’d definitely agree that a certain kind of violence is present in our routine experience. I like to think this poem records the receptivity of our bodies to ambient stressors, such as deeply inadequate political responses to global health crises, although that much more serious violence is here translated by the body of the poem into the background hum of neurotic, nocturnal ulceration of the mouth by the mouth. And there I’m speaking from personal experience, but I know that everybody’s body has its own language for registering this kind of stress.

The central ‘I’ is the first I in the poem and it marks basically the coming-into-consciousness of the speaker, their emergence from the unconscious activity first of the body’s physical contortion and second the dreaming mind. The simile of ‘like a topology’ I hope conveys the ambiguous cause–effect relationship between the body and the unconscious: they both stress each other out. I try to charge ‘topology’, a usually neutral and clinical word for space and form, with the sense and sound of the membranous sadism and lesioning that our talking equipment sometimes subjects itself to. To-polyp-ology.

The awakening second half of the poem disavows the tortured poetic discourse of the first half in favour of a supposed clarity, the clarity we attribute to a possible future (a future not described here other than by the satire of investment). The poem dramatises the defensive and sarcastic ego, who conversationally deflects from a hypothetical enquiry into the internal drama of having a body. We enter the realm of the quantitative—waking up in the morning to check vaccination percentages, although these are not the only percentages that torment us—and the commodifying. ‘My face hurts and I’ could have stopped there, could have been an admission of the self’s bruising, but the enjambment confirms that it is actually just a shame when juice stings. We don’t get a line break to complete the final sentence: what is left out is whatever it is that the speaker needs. It’s money, for the joke to work in this case, but the elision leaves us asking whether we need something else.

On the topic of references, I’ve seen a lot of really interesting poems by, for example, Toby Fitch and John Kinsella that painstakingly care for the diagonalised margin or the triangular stanza, and so I had in mind as an orienting device the idea of a single lineating form (a smooth flow carried across indentations) that would give me a hard boundary to end the poem—would force me to adjust my sentences to something concrete and achieve at least a minimal amount of concision. But the content of the poem takes its starting point mostly just from a narrow set of dental-orthodontic sensations and the experience of living through lockdown in 2021. It’s quite inward-looking in that sense, sort of a reckoning with a personal displeasure that I have magnified to capture the overwhelming quality of mouth irritation when right in the middle of it. Let me know if you have any favourite poems of your own about teeth and gums and things.

What have you been working on lately? Is there anything on the horizon that we can look forward to?

I don’t think I’ve found a voice that works for me yet in my poetry, although I’m getting a lot of use out of a chatty style that draws you in with something unassuming, only simultaneously to cover its heart with the everyday. Sincerity is really difficult; maybe eventually I’ll finish some poems where the ego meets a truth. Otherwise, I’m still trying to figure out how to move on to the next stage of the academic education that I’ve cautiously hypothesised for myself next year. I toy with the idea of writing something longer about I. A. Richards, the subject of my honours thesis and the man who tried to invent sincerity through literary criticism. We’ll see about that.

About Panda Wong 14 Articles
PANDA WONG is an Associate Editor at The Suburban Review. Panda is a poet, writer and living personification of ‘I’m baby’ living in Narrm/so-called Melbourne. She has performed at Emerging Writers Festival, Digital Writers Festival, Liminal, and the Melbourne Spoken Word Prize. She writes about navigating the complex and annoying landscape of grief.