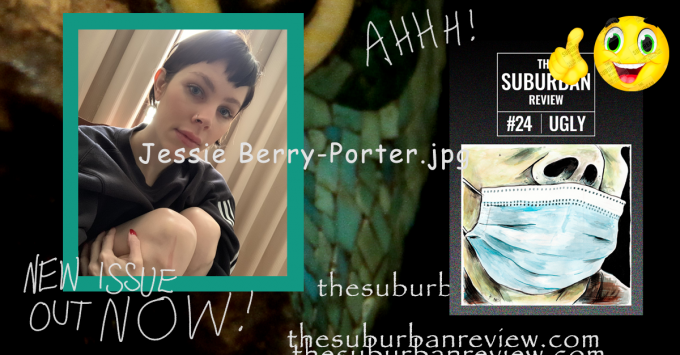 JESSIE BERRY-PORTER writes lyric essays, poetry, non-fiction poetry, and other things. Her work has appeared in places such as The Lifted Brow, Overland, and most recently Dizzy Limits: Experiments in Australian Nonfiction by Brow Books. In 2018 she was awarded second-runner-up in The Lifted Brow Creative Non-Fiction Prize and shortlisted for the Scribe Non-Fiction Prize and Feminartsy Memoir Prize. Her writing explores the relationship between the body and pathology, trauma, and anorexia. She’s often ill but tries to write herself well (it hasn’t worked yet).

Our Associate Editor Luna Hazelthorn talks to Jessie Berry-Porter about her poem, ‘Whatever Doesn’t Kill You Doesn’t Make You Stronger, It Just Doesn’t Kill You’, published in #24: UGLY

Your compelling work in #24, ‘Whatever Doesn’t Kill You Doesn’t Make You Stronger, It Just Doesn’t Kill You’, approaches a difficult personal subject with honesty, dark wit, and a wistful eye for beauty. You’ve talked about writing what you fear: what confronted you most about the telling of this piece?

My greatest concern when writing about anorexia is that I’ll make it sound more interesting than it is, and because I’ve spent half my life experiencing relapse and remission (a harsh but tedious cycle) I feel somewhat obligated to capture the pervasive dullness stitched across it, to remove any mystique or question mark, to reveal the boring slow burn brutality of living with this disease. Obviously, this is a difficult position to be in when you’re writing to be read. Meaning: I set out to sound the right words to be read in the right way but to do this I’m required to write something that triggers interest, holds attention, and this feels rather prickly and precarious as I don’t know what this means or what it looks like, or: I fear to succeed in this way is to fail in a more important way. I mean, would a successful ‘writing down of the anorectic body’ induce disinterest? Perhaps. If I’m to capture the tedium as it is, I imagine the reader yelling, What Is This! before ceasing to read and turning, instead, to watch bad television. The first time I read Marya Hornbacher I recall thinking, This Is It! This Is The Feeling! but her ability to capture the ugly with such poetic precision gave it shine, and that’s the last thing I want to do. In this way, it feels like a win-lose situation. I keep trying to unpack it on the page because I’m convinced there has to be a win-win option (I’ve) not yet realised.

You mentioned keeping notebooks and journals, which become the basis for your creative non-fiction works. Do you find the desire to document a different impulse from the desire to create more poetic/lyrical pieces, or do you consider them part of the same process?

The same process, the same impulse. My journals tend to be more fragmented (or lyrical) than what I set out to publish. The struggle lies in uncovering/creating an anchor so the text doesn’t float, which makes sense considering my affective state (often dissociated). In a way, I consider my notebooks found-texts as I’m unable to draw a reliable connecting line between entries or feel them land in my body after the fact. They remain outside of ‘me’, residing inside ‘her’, or something. I struggle with narrative writing, it feels unnatural and quite painful, because my brain doesn’t organise language in a neat and linear way, it never has. I enjoy writing because it’s a process of removal. Chipping away at text feels like I’m hitting Refresh on my brain, it’s a way to work my way out of internal chaos and prevent overwhelm. I’d always assumed my too-many-tabs-open-brain was a by-product of chronic depersonalisation, however I was recently diagnosed with ADHD which feels right, and like relief.

What media or creative practices have been inspiring you lately?

Familiar remedies. Nothing new. Because we’re in the grip of collective heartbreak, I’ve found it difficult to allocate meaning inside the day-to-day, and when free-falling (when existing in chaos) I turn to recognisable media to cushion edge. New material feels too great a risk, and I tend to re-read the same texts and play the same records until I feel less ominous. David Berman’s Purple Mountains has been the sound on repeat for the past few years. Maurice Blanchot’s writing continues to hit in the right way. I’ve re-read The Madness of the Day on loop. This text is now a cosy scream (comfortable chaos) because I’m prepared, I know what’s coming. It’s a kind thing, being able to rely on something. I think a lot of people with chronic mental illness find solace in art because a poem or sound or film is able to mirror x affective experience (think, weapon against loneliness) whilst also, and perhaps most important, remaining a fixed and reliable source of comfort (necessary when you’re unable to rely on your brain for this). And considering the unpredictable nature of a pandemic, reliable sources of comfort are essential when attempting to maintain grip, ease heartache. I think easing heartache (your own and others) is a priority right now. Art does this. I’m grateful for the artists.