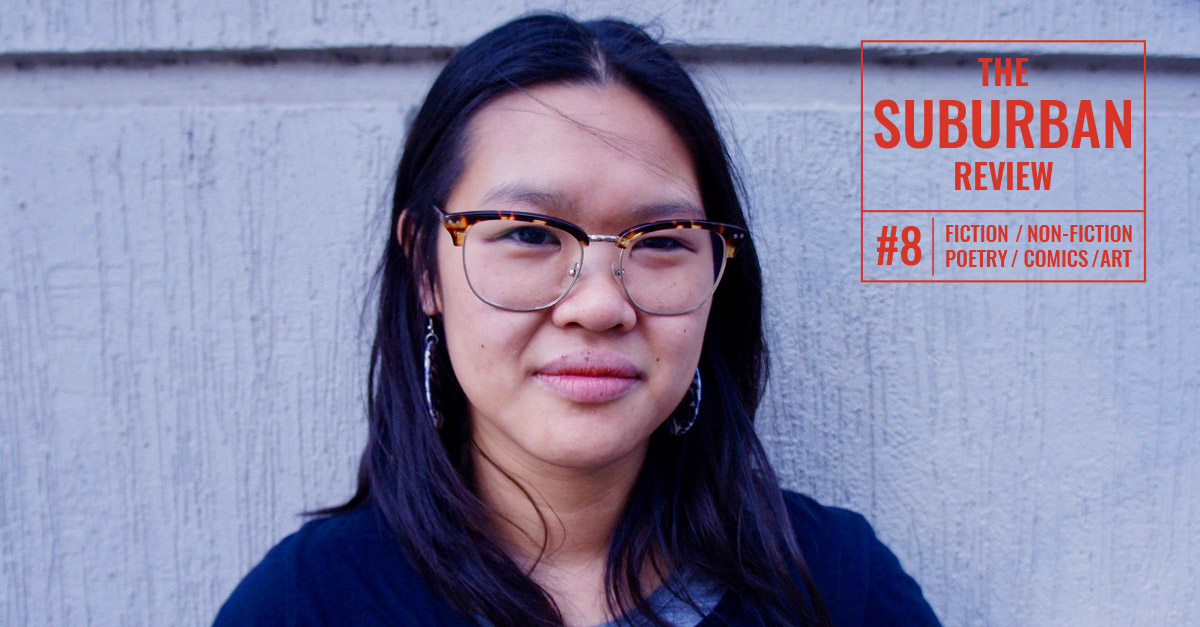 ELENA TJANDRA is a Melbourne-based writer, hailing from Canberra. Her work has been published in Scum Mag, rip publishing, The Writers Bloc, and Pencilled In. She was formerly a print editor for Woroni, the Australian National University’s student publication.

Her story ‘How to Be a Penguin’ appears in The Suburban Review #8.

DK: How do you play with the line between revulsion and humour?

ET: The image that inspired the story ‘How to Be a Penguin’ in #8 of The Suburban Review was pretty revolting to start with. It was a pool of vomit, bits of carrot and other vegetable pustules floating in it, a slow seep across the pavement. I grossed myself out dissecting it, thinking about what was in it, what colour it was, how it reflected in the light. Really grossed myself out. I didn’t want to put people off, so the main thing was to put the image in a context where it could be laughed at—not necessarily taking away from the shock, but using it as a launchpad for a ridiculous scene. It’s probably not the revulsion that is funny, but the situation that it creates: dog shit on the ground is not funny unless it is suspended from a flagpole or until someone falls in it.

I was also very fortunate to read this particular story in front of an audience. Watching the reaction in the crowd was a good test to see whether there were still laughs among the cringes. If there weren’t any laughs, that would indicate something was wrong. I did feel a bit nervous reading it though; it was still hard to know how far to take it. Ultimately, I think that you can be super gross to heighten and create intensity, as long as humour rises alongside it, meets it at the top, and takes over.

DK: How is writing from the point of view of very young characters most different to writing from adult perspectives?

ET: I think the difference is that you can confront the absurd in a blunt sort of way if you write as a younger character. There is less time building believability and logic, and more time spent in the narrative when you are writing from a childlike imaginary. In this story there is a line about childhood obsessions being quite laughable when the girls are deep into their frenzy—I think it’s helpful to insert hooks for the adult reader like this, but I would be careful not to over-do it, otherwise it becomes a commentary.

ET Besides the rather fantastic spectacle of penguins feeding their young, I also think they have great comedic value. There is definitely something in their movement that makes them very funny. I’ve been watching some penguin blooper videos (‘penguin fail’ videos) on YouTube. I highly recommend watching them at half speed.

About Dinu Kumarasinghe 6 Articles
DINU KUMARASINGHE is Deputy Editor (Prose) at The Suburban Review and studied law at The University of Melbourne and Politics and English Literature in her undergraduate degree. She has been published in Voiceworks and De Minimis and is interested in migrant and First Nations experiences, in both literature and law.