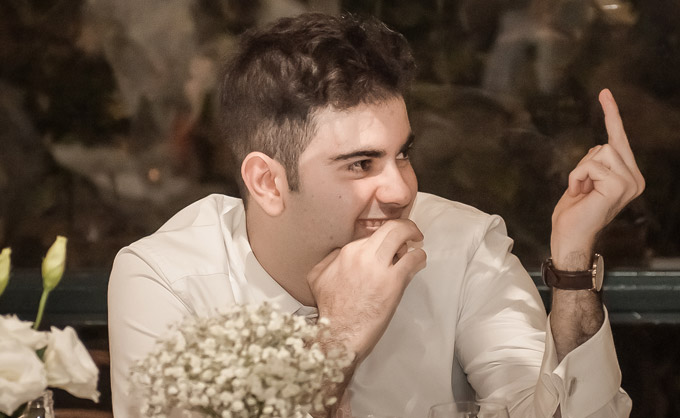 Anthony is a freelance writer and full-time homosexual. His work has appeared in Krass Journal, CityMag and Archer Magazine, among others. He is the editor and publisher of Hook Up zine, buy it here.

Who is your latest writer crush and how did you learn about them, start reading them?

Helen Razer is my latest writer crush… it’s not exactly new, though. I’ve loved her work for quite a while. My friend Sanja, a very good writer and co-editor of Krass Journal (go and buy it), talked about her a lot when we’d have our coffee dates. Sanja is one of those people who is so well read that when she name drops authors or mentions quotes in her work and conversation, it doesn’t feel forced or like she’s trying too hard/ trying to be smarter than you.

She genuinely is one of the smartest people I’ve ever met. There’s no façade.

For the last year or so, my monthly coffee dates with Sanja have been my favourite thing. And my reading of Helen has just worked its way into that. So I guess I started reading Helen Razer to keep up with Sanja.

Can you identify what it is about Helen Razer’s work that resonates so well with you?

I quite often read Helen Razer’s work and don’t understand parts of it. It’s dense and complex a lot of the time. She doesn’t shy away from talking about difficult or complex things. She does want you to understand. Throughout her work, she’ll quite often link to other work she’s read to give some context or explanation. She’s done the reading and she wants you to do the reading, too.

I think there’s a big part of our culture now that is really worried about making things elitist and apologises for itself. It’s born out of the very good discussion surrounding the inaccessibility of education or circles surrounding political discussions. You can’t really make change if only a select, privileged few, are doing the talking. That’s great. I’m so down with that. 100% on point and amazing.

But that conversation, which is great, has somehow morphed into a lot of writing that isn’t informed… as though it’s an excuse to simplify things to a point where they’re unrecognisable. I read an article about representation of gay men, specifically the ‘gay best friend’ trope, in film and television the other day that NOT ONCE mentioned the seminal work of Vito Russo in the area OR the archetype of the sissy, which is actually where said trope of gay best friend comes from. And that’s pretty average seeing as Vito Russo’s book The Celluloid Closet is available in most libraries but also has been turned into a movie that is available to watch on YouTube for free (probably illegally but that doesn’t matter). We can’t write about pop culture in a nuanced way without understanding the context of the images we’re consuming. That means reviewing these images at large.

Doing research and making something accessible to a broad range of people are not incompatible. They’re necessary. I also think that people aren’t so stupid to think that things aren’t for them if they don’t understand them. It’s our job as writers and critics to do the dirty work and make things clear. If that means the work is complex, provide avenues for people to read more widely. People are curious. They’ll go that extra mile.

What I like about Helen’s work is that she never panders and isn’t afraid to talk about difficult things in a difficult way. I don’t always agree, but it’s always challenging and I like that.

What do you look for in Razer’s work? What does Razer do that nobody else does?

I think there’s this part of Helen’s readership that thinks because she swears and because she so often rallies against popular ideas on both the right and the left, that she doesn’t give a fuck.

I think she writes the way she does because she gives too much of a fuck, or—at least—a lot of fucks. In her book The Helen 100 she talks about how her relationship of fifteen years was ended via Facebook Messenger. While Helen was working in a job she hated, her partner was cheating on her. It would be easy to grill her partner and paint her as some monstrous villain. It would also be fantastic reading… but she doesn’t. Helen isn’t one sided, she does paint her partner as a bit of a monster (or maybe I did) but she doesn’t leave herself blameless throughout the whole thing. The book isn’t some tale of heartbreak and how one middle-aged woman, like Stella, got her groove back. It’s a complex and really fucking funny story about how we love and work and survive with each other, through each other and because of each other. It’s also about waxing and sex and her cat.

There’s a genuine sensitivity to her that I respond to. She doesn’t talk the way she does because she doesn’t care or because she’s callous. I think it’s the opposite. Her writing is a sobering slap in the face. A reminder to stop, look around you and assess things.
How has reading Razer affected your wider reading practices?

I think it’s made me less tolerant to bullshit writing? Like … when Beauty and the Beast was released I saw at least ten columns that talked about whether the film was feminist? Whether the film had good representation of gay people? Whether the animated crockery in the film, yes we’re talking about an animated talking teapot, were problematic?

And sure, we all love clicks, but FUCK ME surely there are more important things to write about than what a cartoon teapot thinks? I mean, yeah, our entertainment is important and, yes, messages in our films and our television and in our culture can be representative of broader social issues. But let’s not pretend that your column ‘Why I Didn’t Go See Beauty and the Beast’ is some grand feminist or political stance, or that you not seeing Beauty and the Beast is a solution to any of these broader social issues. It’s just not seeing a movie. You can see a movie and think ‘maybe that message wasn’t great’ and still enjoy it. It doesn’t make you not feminist or suddenly a Trump supporter. It just means you enjoyed getting wrapped up in that story. Helen has touched on this in her piece about the ‘empowering’ Pirelli calendar, published here.

That type of work is shitty writing and even worse activism. I think reading Helen’s work has taught me to want and expect more from our writers and artists and journalists.

After reading Helen, go and check out Jessa Crispin, Shon Faye, Rebecca Varcoe and Nayuka Gorrie. They’re all ace too.