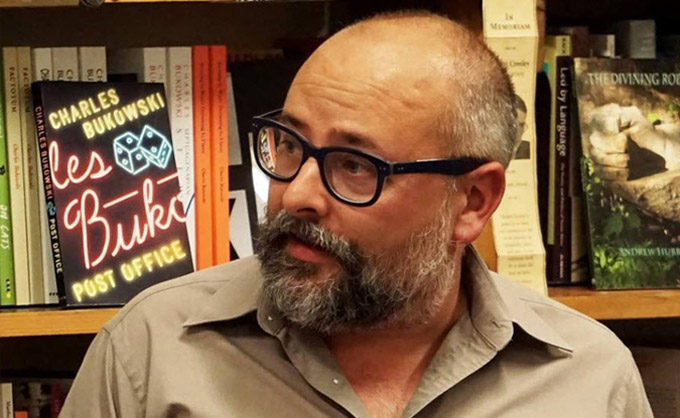 Kent MacCarter is a writer and editor who lives in Castlemaine, with his wife and son. He’s the author of four poetry collections—In the Hungry Middle of Here, Ribosome Spreadsheet, Sputnik’s Cousin and California Sweet (forthcoming). He also co-edited Joyful Strains: Making Australia Home, a non-fiction collection of diasporic memoir. He was an active member in Melbourne PEN from 2010–14, and was executive treasurer on the board of the Small Press Network from 2009–13. He is director of Cordite Publishing Inc.

When you’re reading through poetry submissions, what gets you going / makes you sit up and pay attention?

I’ve never succumbed to the ‘write what you know’ proselytising by some schools of literature—although I am a devout believer in educating oneself on that which you don’t know. If you’re going to write on a subject; if you deign to frame a fictional work around a cultural voice not your own, and your more level-headed friends don’t effectively talk you out of doing so, then be prepared for a gargantuan level of research and immersion. This includes the event of writing as a creative act, irrespective of your intended subjectivity.

When I am sifting through towers of submissions and run across work that reflects an understanding of grammar, syntax and punctuation—natural constraints of any language—and employs these rules to create a solid architecture upon which a writerly pursuit is delivered to a reader or effectively subverts these rules—including the contextual transmutation of characters, letters and punctuation, into unique iconography for deliberate affect—then I am piqued. It’s no mystery that, as an editor, I have a predilection toward the latter (see Pascalle Burton, Javant Biarujia, Claire Nashar, Amanda Stewart) but my taste in writing by no means ignores the prior (see Rachael Briggs, Brian Castro, Luke Fischer, Lisa Gorton). Regarding the latter, the more I am exposed to either side of the sometimes fractious author / editor relationship, the more it becomes apparent what is scattershot doggerel and what is a sophisticated attempt at subversion and experimentation. I’ve produced both, and I encounter both. As for writing that finds its purchase within the established framework of a given language’s rules, then constrained by or freed from forms of poetry and directly because of the—necessary, I argue—allowances for subversion of those rules (important for literary translations as well), there is oftentimes a pungent fug hanging over work that is submitted too hastily. Writers like Ken Bolton and Anne Elvey, as well as some of the aforementioned, manage rule-abiding and -breaking concurrently, a feat that always beckons me.

I’m not particularly interested in being told a litany of things or ideas, or even shown them—I don’t require a story, though I don’t spurn one—without any other agenda or intention.

All of the above is mechanical. I do not have favourite subjects that I look to or hold out for. Stylistically, I’m not particularly interested in being told a litany of things or ideas, or even shown them—I don’t require a story, though I don’t spurn one—without any other agenda or intention. Poetry is uniquely susceptible to this trap. And for those about to squawk, my invocation of ‘agenda’ needn’t be reflexively secular (but, frankly, so what if one’s is?). It can be an author’s lexical intent to deliver a reader from benign ignorance to enlightenment, no matter how minuscule or abiotic the target matter. Take David Brooks’s essay ‘J S Harry’s ‘tunnel vision’, Vicious Sydney and The Car Story’, in which he dissects a single poem by the late Harry. This piece shows the level of detailed engagement and curiosity a seasoned editor will give to a submitted poem. I’m on my own trajectory, but you glean my point. As an author, you can, by reading this example, reverse-engineer at least the scope of what it takes to attract attention. It’s worth it. You don’t have a right to be published as is, there is no turn that awaits you and the editor has not made a mistake in knocking your work back—these are tenets I discovered early on as an author. Later, as an editor, I found they remain thus. If I want pretty, I’ll look at tulips. Occasionally, I’m served an in-flight meal without the aeroplane or even the sky. Ask me to work. It’s welcome. Oftentimes, I read a poem—no matter how its superstructure is fabricated—and, after the first go, it has me, but I don’t yet have it. That’s when my attentions fires.

What is the worst mistake a poet can make?

Take your time. Finish a poem. Read it aloud to a tree or a cat, any cat will do. Ignore it for a while thereafter. Then, read it silently and aloud anew. Mark where in the poem your past self is tripping up or confusing your current self. Edit as required. Repeat, repeat, then let another writer have a read. This is a rudimentary answer, sure, but it’s a process I, as a writer, do. Of course it’s a great feeling to get an acceptance note, and it’s remarkably easy now to submit work to publications … maybe a little too easy. Because of online tools like Submittable (which I now cannot imagine not using), the number of drunk submissions we get has gone from zero to some. If you’re legless, go ahead and write, if you can be arsed, and keep your expectations low, but don’t submit. The first rule of telephony is ‘don’t drunk-text’, and this is much the same. Odds are you won’t remember doing so even though you’ve left a digital footprint of the act—a signature that can be (and has been) recalled as evidence to incensed queries on why a rejection notice was received without memory of the submission itself. Don’t do that. Too, the following doesn’t particularly curry much favour: reply angrily to rejection notices (if I desire to fuck off, I shall certainly do so of my own volition), bellyache about themes, repeatedly ask when your work will be published (unless the publication has been slack with this information, which definitely happens) or categorically refuse suggested edits and demand your work to appear as submitted.

Do be curious, do be strange. Experiment with how you write and how you read.

There is no worst mistake a poet can make. We all make some. Learn from those. I want to quote here what Louise Swinn, co-founder of the innovative, often copycatted Sleepers Publishing, said to close out the opening night event of the Small Press Network’s recent tenth anniversary gala and conference. ‘Start stuff,’ she said. That’s it; two words.

Is there something you have seen done really well recently?

Yes. I am currently blown away by two titles: Bella Li’s Argosy and Tanya Thaweeskulchai’s A Salivating Monstrous Plant. These are both first books by Asian Australian women under age thirty-five. I am, unabashedly, interested in cultural diversity in Australian poetry (cue the ‘agenda’ witch-hunters). Cloak the above facts and the work stands every bit as sturdy. Li and Thaweeskulchai are Australian writers. They write poetry. Their books unfold beyond literature (indeed, we are in the age of redefining what a poem ‘is’) to engage other arts and sciences—the loam of collage and cartography, dance and psychology, respectively—and the results are powerful, bewitching, unique publications, each with dazzle that will not help alter the paradigm of contemporary Australian poetry—whatever you feel it is and wherever you feel it needs to go—for the sole reason that they are the contemporary. They are it. Today. These books don’t form this cutwater because they are written by women younger than most anthologised poets or because they’re Asian Australian. Read them: you’ll find they succeed, wildly, on the merits of intense dedication to writing, creativity and curiosity, and not the authors’ identities—a flummoxing obsession that seems to unsettle a deep vein of machismo in Australian poetry. Tangentially, though: so what if cultural identity is a book’s ideological fulcrum? Natalie Harkin’s Dirty Words is a generational game changer.

Is there something you would like to see more of?

More of the above, please. Yes, I did publish most of the books I’ve noted. It’s a fecund time in Australian poetry. Check out Carmine Frascarelli’s Sydney Road Poems and Tamryn Bennett’s phosphene, both from Rabbit Poetry. Vagabond Press is constantly putting out challenging books.