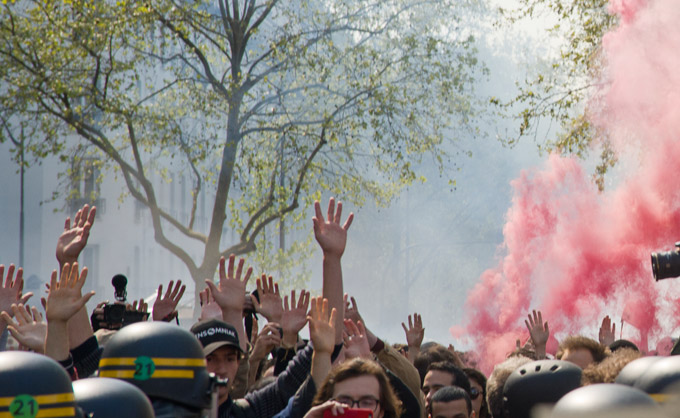 Francis McKee is an Irish writer and curator working in Glasgow. Since 2006 he has been Director at the Centre for Contemporary Arts, Glasgow. He is also a lecturer and research fellow at Glasgow School of Art. He has recently published two books – How to Know What’s Really Happening (Mophradat/Sternberg, 2016) and Even the Dead Rise Up (Book Works, 2017). He tweets here.

1) How does your audience influence you and how reciprocal is your writing practice?

Previously published essays got little feedback but the internet has begun to change that significantly. Now I upload the essays to academia.edu and feedback is regular. My recent book How to Know What’s Really Happening has been a revelation in that regard. With its publication, Facebook and Twitter have really made an audience visible to me: the interaction online and at the book launches has given them a voice. For the recent book launch I didn’t read but improvised a new chapter, feeding off the audience’s reactions. There was also a series of other responses from artists – a wall size painting by Laurie Charles, stories by Sven Augustijnen and Elanor Ivory Weber and music by Geo Wyeth. Now the two artists who commissioned me – Maha Maamoun and Ala Younis – are interested in the new chapter (and, of course, they were my first audience for that book).

So today my writing reflects a dialogue with many other people, which reminds me of the early history of the novel when authors such as Samuel Richardson circulated chapters of his novels and incorporated critical feedback and ideas.

2) We’ve all been told to beware the effects of the ‘echo chamber’, but how do you think non-fiction writing can challenge this phenomenon?

Research. Finding views that challenge your beliefs, understanding why there are disturbing alternative narratives of events. Non-fiction should have a critical edge — not just challenging the views of those you disagree with but equally dissecting the easy consensus of your friendly circle.

The ‘alternative facts’ quote was rightly mocked but it contains a kernel of insight in a social media world. There are parallel worlds of interpretation of the same events. I have been researching 19th century female spiritualists who channelled messages promoting women’s suffrage and the abolition of slavery. One of the most detailed and accurate histories of the phenomenon that I found online excited me until I reached the final paragraphs where it was argued that Satan possessed those women and by default, Satan possesses contemporary feminists…. So, the same facts, the same histories, can be employed to different ends.

We should aim for razor-like critical faculties in non-fiction.

3) What do you think is the role of the personal in your writing, and do you have an example of a personal experience that has motivated your work?

I try to stay close to the personal—I have a better chance of knowing what I’m talking about and the use of personal anecdote or experience can make a work more accessible than a theoretical or academic voice.

There are a few personal experiences that have motivated my work. One is my attempt to know more about what I’m encountering — I can feel stupid or poorly equipped to understand other people or events and writing gives me a chance to work on that.

I also took up photography about ten years ago and that led to a similar situation. I’m mostly a street photographer and I photograph many protests. Often in retrospect I discover much more than I see at the time. I think too that my mind and eye might be making decisions that are too rapid to be consciously articulated when I take the photograph. But I keep learning and realizing how much I don’t know. That’s ok — it’s an unending process: even better sometimes to unknow.