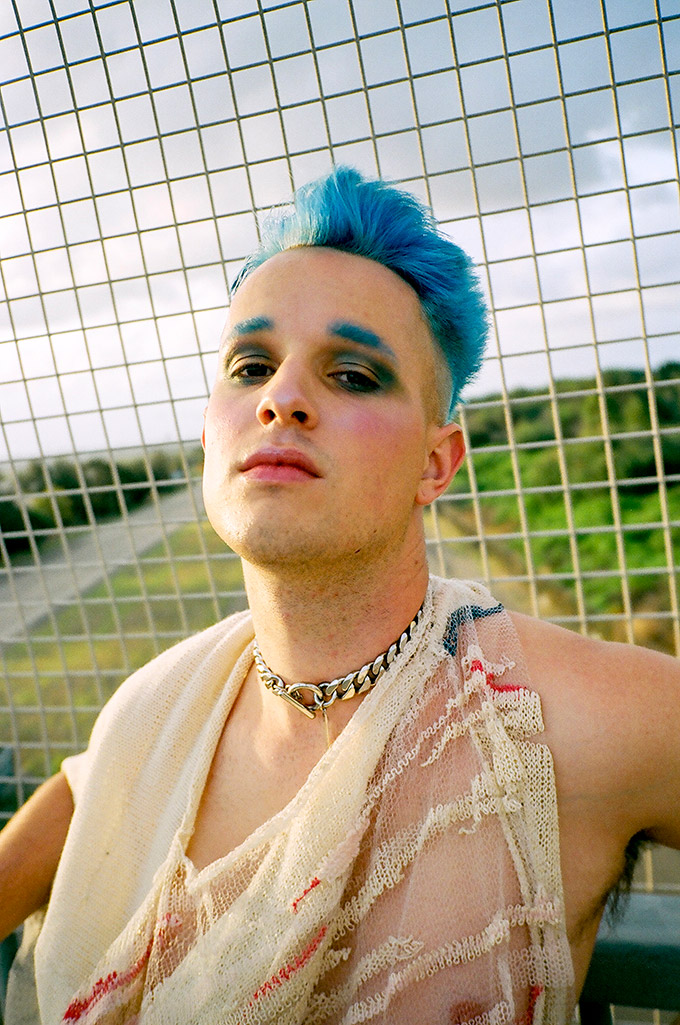 Jonno is a non-binary photojournalist and artist living between Adelaide and Sydney. Their work has been featured in The Guardian, I-D, The Fader and Teen Vogue. In recent times their writing has touched upon themes of isolation, disenchantment, vulnerability and sentimentality and fraught gendered identities in unlikely or unconventional places. They are a real life model! and blue is obviously their natural hair colour.

1) How does your audience influence you and how reciprocal is your writing practice?

A while ago I really began to notice common threads amongst my audience or ‘follower-base’ if I can be so audacious to call if that, and it had become pretty clear that most of the people paying attention to my work were young girls, baby queers and gender ambiguous kids grappling with social media. It was cute to make that distinction! I must be doing something right if those are the kind of people who pay attention to what I’m doing. I also felt like it was meaningful that my work wasn’t complying or appealing to the attention of straight men, lol. I still think a lot of writers get caught up in pandering or streamlining their work so it plays into acceptability patterns, maybe to build their reach and appeal to hegemony. It was gratifying to realise my audience had become more relevant to people who had shared my experiences. Truthfully I think straight men should be the people who need to read my work the most but I’m beginning to feel that if someone doesn’t want to pay attention to what I’m saying in the first place than I really don’t expect much from them… I guess it’s a case-by-case thing.

It feels important to me that my writing isn’t talking down to the reader. I think we can get wrapped up in expressing ourselves a certain way to circumvent being vulnerable or emotionally honest. We dance around the issues we need to be looking in the face. Sometimes that’s ok, though I try to avoid buying into that.

2) We’ve all been told to beware the effects of the ‘echo chamber’, but how do you think non-fiction writing can challenge this phenomenon?

Sometimes it’s good to ‘know your enemy’ if you have the energy to be wielding metaphorical pitchforks and donning symbolic tin armour. I find that growing up in really isolated regional places gives you an understanding of the moral panics/hive mind mentalities people buy into. I try not to become too comfortable in my own social justice rhetoric. To justify my own identity I had to spend a lot of time working and chiselling away on those things myself, deconstructing those harmful ideas I’d internalised, so I can empathise with people who are stuck in dogma and find write away from them. Through clever and emotional accessible writing, you can carefully and reasonably deconstruct those myths, the way one might seductively peel a banana.

And the truth is: people in our so-called progressive western circles always have ways they can improve too. Looking into that harsh reflective surface of accountability isn’t just bad for the eyes, it’s also very scary! Literary spaces are so assured of their own wisdom and reach and it’s often not a good look. Some of the conversations we have might not necessarily be interesting to people outside of our circles, that’s ok. I always try to speak to as many people as possible and include varied voices in my pieces, draw upon the right references, and pull ideas together in a fluid and confident way.

I’m really trying to emphasise the importance of reflexivity and context in my writing. I hope I can guide people towards thoughtfulness and intent instead of guilt-driven thinking. I think it’s easy to fold into that echo chamber and deflect your own guilt/protect your image as opposed to figuring out how you can approach something out of genuine care, love, concern. It’s folly to assume there’s going to be a ‘right’ way to build your values, your politics, your worldview. Its always good to step back and ask, is this my place to speak? How can I be true to my context? What can I offer here and now that no one else can? When we become kinder and less judgemental we become more open to complexity and development. I realise this is vague. I guess I just want to be gentle when it comes to speaking to a young audience especially.

3) What do you think is the role of the personal in your writing, and do you have an example of a personal experience that has motivated your work?

I really feel like the first person industrial complex is its own monster in literary worlds. But I just don’t think my writing makes much sense if I’m not gushing or cutting myself open in some melodramatic way. I have big feelings and appropriate responses which all need to make it into my writing if I’m trying to stay true to myself.

I think about this daily. How often do we experience things or feel things that we convince ourselves are ugly, alien, abnormal? I guess I’m trying to detail that in my work and allow an acceptance of those horrifying internal processes. I want to create pause for those feelings and not rush past them. I felt a lot of difficulty early in my life moving from the country to the city and feeling like I was stretched between two landscapes. When I moved to Sydney all those memories ruptured, ignited again, and I was dealing with a bit of trauma as well and I think I regressed a bit and thought back to those initial experiences as a way of both comforting and confronting myself. There’s really not much of an understanding of how arresting and troubling it can be to move place. I aggressively and quickly separated myself from all of my support systems. Even now after living in Sydney for a year I’m still dealing with those feelings. I’m a hyper-sensitive people and writing it out has helped me see where to go from here.