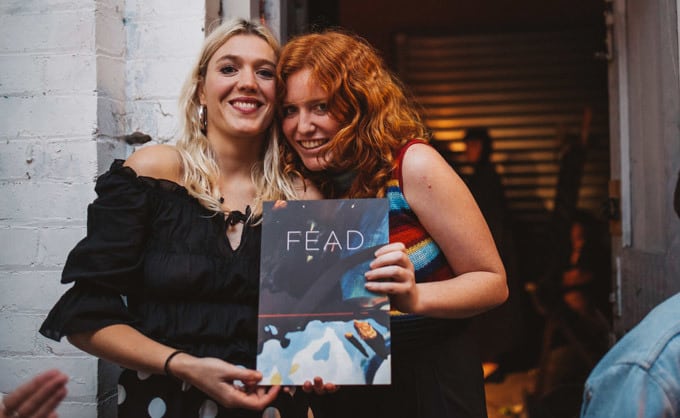 Fead is a multidisciplinary print magazine that explores ideas, creations and people.

Jordan McKendry caught up with the co-founders and Editors, Augie Rathjen-Duffton and Eliza Herbert.

Thank you for your time in talking to me about your magazine and the amazing work that you both do. Fead is an inspiring collective of up and coming writers and artists… such a joy to read. It’s a real pleasure.

Can you tell me how the idea for Fead come about and what you envisioned when you first dreamed up the magazine?

Augie: A friend once bought me a ticket to visit her in New York. It was while I was there that I first had the idea for FEAD. We spent most days trawling art galleries. On a rainy December morning, in a gallery on Fifth Avenue I came across a painting that completely overwhelmed me, ‘A Portrait of a Peasant’ by Van Gogh. It’s not a large painting but it has a large presence. For me it was as if the painter had been able to paint the life and emotions of this person, to lock them into this painting, creating a portal to the past. I stood there crying. I realised that this is what I was looking for, to be moved, for life to be paused. This could be looked at as simple escapism, but this feeling of being moved or affected by something or someone manifests as the need to dive beneath that feeling in an attempt to understand it, therefore making us engaged with what we are viewing. So the idea for FEAD first came from that direct experience. I wanted to build a platform that could showcase art that moved us in a sublime way, but that also moved us to act and to speak, which at this fragile time we need more than ever. Within that it was important for it to be a platform for marginalised voices.

It looks like you publish the work of some amazing people around you; including friends, colleagues, and peers. What is the most rewarding part of being able to create a platform for fellow artists and writers to get their work out there?

Augie: It’s rewarding when you find a voice that you admire and who has inspired and changed your life in some way. There is something special in being able to share that voice and then wondering how other lives will be impacted by it, often in a positive way. For example Clementine Ford’s book ‘Fight Like a Girl,’ really opened me up to my own internalised experiences of misogyny, something that before reading that book I would have claimed I didn’t have, and really began to free me from those damaging ideas in myself and the people around me. So I was happy to think of people coming into contact with Clementine’s work in our last edition.

Eliza: Another incredible thing that has evolved out of this experience is just how supportive people can be to each other. It seems to work in this really communal way, where people that we have never met before are responsive to us in such an open and generous manner. We are consistently forming new relationships with people who share similar beliefs, or beliefs we can learn from, and are finding new ways to facilitate other artists’ practices and ambitions. Take Madison Griffiths for example. We had never met her, but we approached her after being a fan of her writing online. This has lead to what I believe will be an ongoing relationship where we grow from her strength and openness. The same can be said for many of the people we have worked with. It’s as though we are all constantly learning and then sharing that breadth of knowledge and inspiration with each other in the process.

You mention on your website that you want to provide a platform for those questioning global issues and how their own identities fit within it. Could you elaborate on the importance of this statement to your publication?

Augie: In the current political climate it is often hard for an individual to find their place in society. Many people use art as a vehicle to find this place and our publication intends to create an outlet for this. So often for myself when I write or paint I understand something that I am going through at the time, as if the art becomes a reflection of my inner self. The same can be said for society as a whole, that art becomes our mirror to see who we are, and hopefully within that, if we see something we don’t like, we are able to start changing it.

Eliza: The role that art and creativity can play in accessing different thoughts, feelings and emotions that might be hidden within us is phenomenal. The meditative act of painting, for example, can allow a safe space for undiscovered thoughts to gently arise. Or by the choice to create an artwork that speaks to current politics of global issues, one will often choose to inquire into that issue and look at it from a number of angles. This interplay between the emotional and the critical, and the cognitive and non-cognitive, can often be found in artistic creation, and also in the experience of viewing or witnessing. I think this is really important because it can generate alternate conversations and ideas on issues or emotions that are often tired, trapped or predetermined. Additionally, artistic expression and appreciation can serve as a reminder to look at the beauty of things in your life and the things that hold the most value.

What are your thoughts on the role of small or independent publications in regard to influencing and transforming the literary and art scene?

Augie: Independent and small press publications provide spaces for people to share ideas and to engage with one another. I think publications like ours can give a voices to people who would otherwise be denied them, and it is our responsibility to be a platform for those voices. I think it is important to be politically and socially engaged and to let that come through the pages of these publications. For us it is also important that it is accessible to all people; that we aren’t elitist in our language and how we conduct ourselves.

Eliza: The nature of independent publications is that they are often quite personal and are not backed by a big financier with their own motives. This can allow for more timely stories to be shared, without the rush and formula of mainstream news.

One of the big things we’re experiencing in the media right now is the manipulation of fear. It’s as though they are taking our fears and sending them back at us, which might be selling papers (or generating clicks) but, adversely perpetuating a culture of fear – which can have huge repercussions. It can affect our mental health, our acceptance of diverse cultures and beliefs, our trust in political systems, our neighbours, and so on. It’s clear that this isn’t working. So the more that we find ways to foster a sense of community between people – the better. I think that literary and art scenes are highly influential in creating supportive and open communities, and independent publications can be a backbone in uniting and expanding these communities.

Finally, what empowers you to do the work that you do?

Augie: Sharing things is fulfilling. It’s like making a meal for your friends or family. The love for what we are sharing, and knowing that these voices are important and need an outlet is what empowers me to do the work. It’s also the people you meet and talk to along the way. People are so open and kind.

Eliza: And pretty much everything we’ve discussed in this interview. They are all the driving forces behind this project. Running a publication off your own time, passion and pocket can be exhausting, but having a really grounded belief in what we’re doing and having such an engaged community around us – they empower us to keep at it every day.

Pick up a copy of Fead here.