Clea Chiller is an artist, illustrator and festival co-ordinator of Homecooked Comics Festival. She has exhibited work at Platform Contemporary Arts Spaces, Seventh Gallery and Bruce Artist Run. She is the creator of Garbage Bags, a series of darkly humorous autobiographical zines. Check out her previous work for The Suburban Review here. Follow her instagram here.

Thanks for chatting with us Clea!

I was working at Homecooked Comics Festival in 2015, and as part of it we were flying in special guests. One of the guests was New Zealander Dylan Horrocks. I didn’t know much about him—the festival director, Sarah Howell, had curated the guest list. I decided to brush up on my knowledge before the festival and read his latest book, Sam Zabel and the Magic Pen. I was suitably impressed and really excited about meeting the man. As I looked for more information on Horrocks, I kept coming across references to his stunning first book: Hicksville. I wanted to read it before the festival but, unfortunately, ran out of time.

The festival came around and I got the pleasure of meeting Dylan. I showed our guests around the Northcote area and helped them feel at home. I lived right near their accommodation and could pop by sporadically. I felt a special affection for Dylan. He had wisdom and was incredibly encouraging. He was also really funny and we shared a love of Joy Division. On the last day of Homecooked, I bought a copy of Hicksville and Dylan drew a special message in it. Then he boarded a plane and flew back home, leaving me thoroughly inspired.

Hicksville is a comic book about comics and comic writers. Set in the tiny New Zealand town of Hicksville, it follows the stories of multiple characters. It focuses mainly on comic artist Sam Zabel and an American journalist who has come to Hicksville to discover more about their most famous export, Dick Burger. Sam has returned to Hicksville after his gag comics have become a bit too nihilistic for his London publisher. Dick Burger comes to his rescue by offering him a job on a mainstream comic in America. But at what cost? He is having a small creative crisis, torn between his edgy personal project and having to make money in commercial comics. Sam seems to be a reflection of Horrocks himself, and he has written him as an incredibly relatable character. He is imbued with the perfect amount of self-doubt and depression.

The story of American journalist Leonard Batts, unfurling the mystery behind expat Dick Burger, is enthralling too. Why does nearly everyone in the comic-book obsessed town of Hicksville hate him? Horrocks does a great job of showing the slow disillusionment of a comic fan-boy with his hero. This element of the story also keeps the plot driving forward while involving all the quirky inhabitants of the town.

In the copy I have, Horrock’s has written a prologue in which he states that he had to hold back from re-drawing a lot of this nearly decade-old book. I’m glad he didn’t. Yeah, some of the characters look a little hokey and his later books definitely look more polished but I enjoy seeing his style develop. There are still plenty of beautiful images in the book and Horrocks has a great eye for the New Zealand countryside. He draws landscapes with a perfected pared-back simplicity.  You can see why the characters have such a strong connection with their town.

I read Hicksville just as I was starting to make my own comics and was finding my way from cartoons to drawing actual panels. It was a great book to read for me at this time, it made me feel that I could use personal anguish as the fuel for my stories. Even though Hicksville isn’t necessarily autobiographical it explores the nature of creativity, and making comics in particular. This is a book that has affected how I write, draw and view comics. 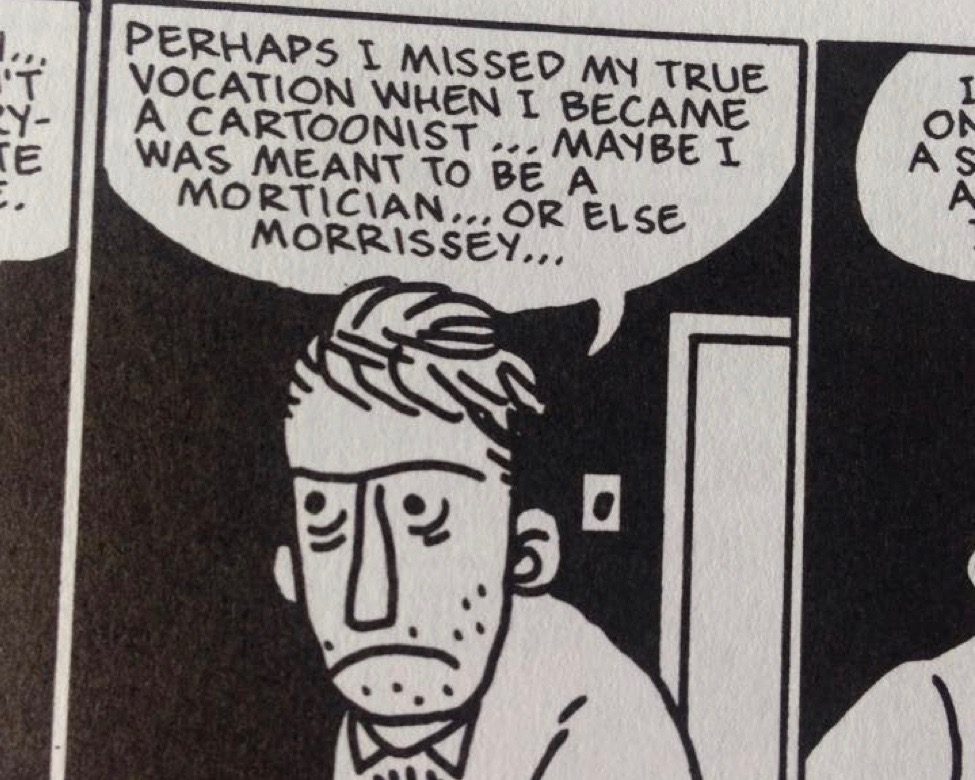