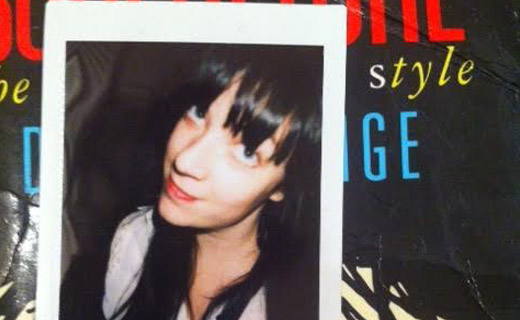 In your forthcoming story in Vol. 6 You Served Ice-Cream for a Living there is an ‘unfocused’ focus to the writing. There is a compelling haberdashery quality through piecemeal perspectives made by the protagonist throughout the narrative, and, stylistically, in the bricolage composition of episodic prose and ‘found’ poetry. What do you tend to (un)focus on in your writing— in this story and generally in your work?

Hmmm… this is an interesting observation. I’d not really thought about it in that way before. I think, for me, the ‘haberdashery quality’ that you’re talking about was my attempt to create a unique, nuanced and—perhaps most challengingly—maintained voice. It took me about five years to learn how to write a short story. Of course, I’m still very much learning, but to get to a base level of having something to work with, that took about five years. Putting the craft stuff to one side, I feel like most of that time was really about learning my process for writing shorts. And I think I realized I need to hear a character’s voice in my head before it’ll work on the page. I found the protagonist’s voice online. A friend of mine is quite quiet and contained in real life, but has this incredible Facebook feed with brilliant little one liners, such as:

MY BOYFRIEND’S BEARD IS SO BIG IT CAN SOAK UP ALL MY TEARS.

I think her Facebook voice had been floating around in the back of my head for a while, but I didn’t know what to do with it. And then I went to Melbourne and wrote a flash story cycle, I guess it’d be called, and the structure seemed to work well. I love Wollongong and think we should be writing about it more and I was feeling bad for not having written a story for a while and all of these things came together and I spent a couple of days just stealing stuff from people’s Facebook walls, and inserting little stories and happenings from around Wollongong and then bam! there was a story. I thought it was pretty shit at first and that the original Melbourne one was better but I showed my friend Hayley and she liked this one better so I submitted to you guys.

But, I guess I haven’t actually answered your question. I think the ‘unfocused focus’ probably has more to do with characterization than straight style or structure. I think that’s how her (the protagonist, not my friend) voice sounds in my mind (that jittery, jump around bricolage), that’s how she thinks and views the world so I wanted the stuff on the page to reflect that.

In terms of what I normally focus on in my work – I’ve been writing a lot about ‘race’, place and Western Sydney. I don’t normally write about romantic relationships. Part of me feels like I have to write about serious topics to be a serious writer, so this is kind of only the second time I’ve written about whatever this story is about. So, I’m not sure if that answers your question. I guess I kind of have no idea what I write about/(un)focus on yet. I’m still trying to figure that out. But I saw this great quote about how Tsiolkas is still figuring out what he writes about so I feel like there’s hope for me yet!

What are you up to in life, outside of writing awesome short stories for publications like our dear Suburban Review?

Haha, that’s very kind of you. I work in literary event management. My paid job is as the Director’s assistant at South Coast Writers Centre. My passion project on the side is Wollongong Writers Festival (18-29 November, 2015). We’re about to go into our third festival/year now. We spend most of our time Googling things. For example: ‘how to write a press release’, and then giving it a go and seeing what happens. I love that TSR is a grassroots start up. I love the idea of people out there giving it a go, Googling how to write a funding application, failing and then trying again and failing a little less. That’s how it feels WWF works. We’re trying to rebrand as W’Gong International Writers Festival next year just to avoid the wrestling and sick animal associations.

And I’m getting ready to start reading for my PhD, which I’ll start next year. I’m excited about two dear friends also doing their PhD next year. It makes me so happy to have finally found friends as nerdy as me. I think I’m going to look at Western Sydney literature, but I’m not sure. Send me some ideas to steal! J

Speaking of stealing, I like your term ‘found’ poetry. It makes me feel a little better about the story. I’m not sure I actually feel ok about stealing people’s Facebook statuses. I mean, there’s probably only six stolen lines or something in the whole story, so I feel like it’s still my work. But I didn’t get permission from the two people I stole statuses from. Someone said FB is public domain, there to rip off. But I don’t know. I feel like you wouldn’t just steal a photo off FB and then claim credit for it. So, anyway, I guess maybe I’ll at least show the people I steal from next time before I publish a story. Maybe that’s a good middle ground so I can keep stealing, somewhat ethically.

You were recently awarded the Ray Koppe Young Writers’ Residency this year, to work on your novella Infomercials for mixing bowls and treadmills. Congratulations! How did you find the experience and how has your novella progressed since?

Yes! I was absolutely blown away and so appreciative to have been awarded the residency. I’ll be staying at Varuna in April 2016, so it hasn’t progressed much yet.

The entire story takes place in one bedroom, as a woman is trying to get off heroin. I’ve taken some drugs before, sure. But I’ve never been addicted to heroin and I’ve never spent three weeks locked in one bedroom. So it’s missing all the detail. Not that I think you have to experience things before you can write about them. I write about a lot of things I’ve never experienced. But I think you need to have some thread of a connected feeling to an experience to be able to write the details well. And I think it’s often the details that make it or break it in terms of believability and engagement.

I heard about this place in the Blue Mountains. My friend, the poet Joel Ephraims, went there and said it was really hard and almost drove him mad. I feel like that’s the kind of experience someone sitting in a bedroom for three weeks trying to get off heroin would go through. Obviously not the same level of difficulty, but certainly closer to that experience than my days riding the free bus around Wollongong. So I want to go there—there’s no books, no reading, no writing, no talking for the whole time. I think it’ll be difficult for me. I don’t like talking so that’s fine. But I struggle to do nothing. So meditating for ten days straight and not having access to books or familiar people, I feel like maybe there’ll be something within the feelings that arise that I can pull from when I go to Varuna to fix my Honours novella. It needs a lot of fixing.

Chloe’s piece You Served Ice-Cream for a Living can be found here in The Suburban Review Vol. 6!