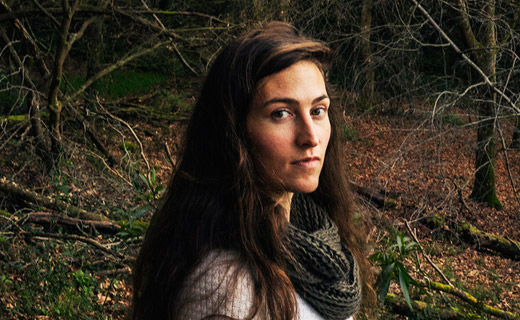 There are many conflicting surfaces expressed in your micro-fiction. I’m interested in your process: Do you start with one tiny idea and let it grow, or do you have the whole scene in your head and boil it down?

The way you’ve described it as “many conflicting surfaces” is really resonating with me because, in a strange way, I feel that micro-fiction is a more organic and intimate expression than my more structured, longer fiction is. For me, the process of writing micro-fiction is a combination of my weird, internal stream-of-consciousness, and the idea of ‘coincidence’ or ‘déjà vu’ that seems to make up the way we move through the world. I think as humans we are always searching for connections between and meaning or significance in the randomness of life. Like seeing portraits of Jesus in the toast, or seeing the same sunglasses on two different people in the space of an hour. Often what I’m writing about are fairly awful events, horrors enacted onto people with little reason, or even just moments where my characters feel utterly lonely and isolated. In a way, I think our brains look for patterns of connection because we need to feel as though there is evidence of a structure to our existence so as to make sense of the senseless.

But to actually answer your question, I think it is different with every piece. Sometimes I manage to be very planned and considered but mostly it’s a frenetic weaving together of everything that’s on my mind, followed by lots of cursing at myself, brutally slashing words from the paper, and throwing scrunched up pages at the wall.

There’s a definite tension in these stories created between the characters’ ties to one another, contrasted against their emotional distance from each other. It speaks to your level of skill that you can do this with so few words. Is this a common theme in your work? What other areas of human relationships and experience do you like to explore?

Yes! It is a very common theme in my work because I feel like it is essentially the question I am forever trying to answer within myself. Without getting too existential, I have a feeling that life is this constant battle between our longing to feel connection to and acceptance from other people, and the railing against the knowledge that we are all intrinsically alone.

Family is a particularly fraught emotional relationship to navigate given the historical weight of our ties to those people. As well as that, I think it is really hard to shake the established patterns of behaviour we exhibit within our family dynamic. I am definitely guilty of acting like a snarky teenager and then complaining, ‘No one recognises I’m an adult around here!’ Love affairs as well have that intensity of emotion, like little microcosms of the undercurrent push and pull between connection and loneliness. It’s all so endlessly fascinating! So I guess I feel that the most important interactions in life are always negotiating emotional connection and distance.

I remember reading an interview with Nan Goldin talking about how the wonder of Diane Arbus’ photography was that it was all about herself not wanting to be herself, and trying on the characters of all the people she photographed. I think I am trying to do the same thing, without any of Arbus’ genius and much less finesse. So if I’m really honest, I am motivated by a fairly selfish concept. I like to explore the complexities of relationships; I like seeing what people do when they placed in positions of utter vulnerability or exposure. But as a testing of the waters, a trying out of how a person can respond to and recover from something gut-wrenching. In preparation, almost. I’ve always felt the need to know in advance how I would cope in certain situations. And I guess the reason why I obsess over these things is because I will never really know. How infuriating! I will never be prepared! My mother would say, ‘Not everything is always about you, Harriet.’ But it is.

Micro-fiction demands a certain amount of discipline, and could be considered closely aligned with poetry. I’d be interested to hear what attracts you to this form in particular, and is it a form you write in often? What strengths and limitations do you feel it brings to writing?

I love micro-fiction! It’s a form that I am writing in often at the moment because I’m working on a manuscript length collection of micro-fiction which these pieces will be part of. It’s an important work for me personally because it’s an exploration of the patchiness of memory and the distilled way in which we retell the stories of our past in order to qualify ourselves in the present. That’s a very vague and hand-wavey explanation but it’s still early days.

Paradoxically for a writer perhaps, I am really captivated by the power of the unsaid. There is a complexity of emotion that can be expressed through the non-verbal like a facial expression or the words that someone leaves out of dialogue. In a sense it’s a much more filmic approach than a writerly one but it fits micro-fiction perfectly. I think there are definitely depths of tragedy that we cannot articulate through the written word. Or, by attempting to give them articulation, we remove some of the power. Similar to how a joke looses its humour if it has to be explained. What is really fascinating to me is that this approach is directly asking the reader to engage empathetically with the characters. We are all naturally quite good at doing this. The cool thing about playing with the unsaid in fiction is that it is much more unifying and identifiable than it is isolating!

So to me, this form has far more strengths than it does limitations. There is certainly an overabundance of writing out there already that is pointlessly over-written whilst saying very little. In a way, using 2000 words to describe something rather than 20 is more limiting as it allows only for the writer’s interpretation of the scene and leaves little room for the reader. Micro-fiction done well, and I say this with the recognition that I am still far from this point myself, has the potential to carry vast, complex worlds within it that target the reader’s imagination and ability to travel further into the narrative using their empathy rather than having to be guided by words. It is quite beautiful and very liberating in that way. As a writer, it is a very nice feeling being able to share a creative experience with your reader.

One limitation I can see is the propensity to become a bit repetitive when you’re working in such a short form. But it’s also really exciting to be forced to find creative ways to avoid repetition! Another limitation may be the way in which micro-fiction is not a particularly fashionable form of writing. It doesn’t carry the literary clout of the novel, for example, and so you are possibly railing against people’s preconceptions of the merit or substance to be found in micro-fiction. But in my opinion, as an artist you utilise different mediums to make different comments. There seems to be an unending amount of amazing writing to get through in life but there is a million times more of just bad stuff. It frustrates me that there are then judgements placed on certain forms and genres. All forms are valuable and any writing kicks you in the guts or makes you feel something is worth being celebrated.