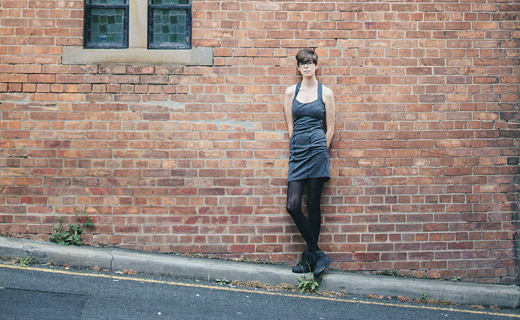 Your work There’s Cairo in This City really captures a sense of place. How did you find an intersection between Cairo and Brisbane?

We tend to think of other places (cities, countries) as being ‘over there’ while we are resolutely ‘here’, separate. I’m curious about what could happen if I came unstuck from these ideas – if I let go of the idea of ‘here’. I’ve visited more than three dozen cities around the world, and found more similarities than differences. Cairo and Brisbane are cities I would normally never think to compare to each other, and yet I had a moment where I couldn’t tell the difference between the two. It’s interesting to think that ‘place’ might not be as stable as we assume. Honestly, I don’t know if this answer even makes sense, probably because it’s something that I’m still trying to work out.

You recently completed a solo show in Perth for Fringe World. How does your performer side inform your writing side?

I’ve been writing for performance for seven years (longer if you count high school inter-house productions, which I don’t in case anyone asks me to relive them), and I’ve been doing this so long that I’m wary of my slam-poet DNA showing up in my page poetry. I catch myself putting in too many jokes, pop culture references, audience call-outs – things I would put in specifically to engage a crowd. (I don’t think there’s anything wrong with those things, I just don’t want to be limited to them.) With page poetry, I love that I can explore intricacies and unfurl ideas without worrying about losing that guy in the third row who’s got his arms crossed and clearly just wants me to finish so he can go get another beer. But writing for performance has taught me to work hard to stay interesting, to be hungry, to think about my audience. Now I’m working hard at my ‘page poetry’ chops.

What do you love the most about the city you live in?

I love the way Brisbane lives on its river. I grew up in Perth, where the Swan River is a massive divider – through the landscape and through the city’s psyche. There’s a long-standing animosity between ‘North of the River’ and ‘South of the River’. I think that exists a bit in Brisbane, too, but the river here is more like a pleasant ribbon that winds through the town and is criss-crossed by bridges and overlooked by glass windows. And the CityCats are fantastic. They are catamarans that you can ride up and down the river for the price of a bus ticket. SRSLY!

You can pick up a copy of Volume 2: Metropolis here.